“After this, Jesus knowing that all was now finished, said, “I thirst.”

Of all that Jesus could cry about at the cross while crucified, why was it thirst? Why not about his searing pain enveloping His entire being? Why thirst?

The Bible does not give us any specifics. But medically speaking, thirst is the strongest need for any human being. It is tougher on the body than hunger. A man can survive without food for about 30 days. But an average man could only survive for 3 days without water.

In an emergency, thirst usually results when someone loses a significant amount of blood and fluid in his body. Water is carried in the blood. The more blood is lost, the more thirsty one gets. Hypovolemic shock is the medical term that describes such a condition. When left untreated, this condition could lead to multi-organ failure and death. This was the condition that brought such an incredible thirst within Jesus. After losing a copious amount of blood due to countless beatings and floggings, Jesus was obviously thirsty.

Thirst is an undeniable demonstration of our humanity. Sinful and fallen humanity. In the Scriptures, thirst characterizes the life of a sinner. A sinner is always thirsty – Isaiah 55:1-3. The woman at the well that our Savior confronted was thirsty in her soul – John 4:13. At the cross, Jesus was expressing the thirst that came with being the sin-bearer of the whole world. He thirst was because He who “knew no sin, became sin for us” – 2 Corinthians 5:21.

In heaven, thirst will no longer be known or experienced by God’s people – Revelation 7:16. Our soul will no longer be thirsty. The sin, that causes our soul to be parched and shriveled, does not exist in heaven. Before God’s presence, we will enjoy life to the fullest!

Yet, thirst can also be an expression for one’s unquenchable longing to be with God and to enjoy His presence. The psalmist one wrote, “As the deer pants for flowing streams, so pants my soul for you, O God. My soul thirsts for God, for the living God. When shall I come and appear before God” – Psalm 42:1-2. At the cross, Jesus, as God’s Son, can also be expressing His undying longing to be reunited with His Father in heaven. Jesus longed to be in heaven, back in His Father’s presence. During our Lord’s ministry, Jesus had expressed on numerous occasions His desire to return to His Heavenly Father – John 17:11.

At the cross, Jesus felt separated and forsaken by His Father. As the fires of God’s justice roared and enveloped His entire being as the sin offering for mankind, Jesus felt that separation from His Father. He was unfamiliar with it. In eternity, the Son of God had never been separated from the Father. But because of our sins, Jesus was forsaken – Psalm 22:1, Matthew 27:46

It is should not come as a surprise, then, that Jesus was thirsty. The thirst that consumed our Redeemer at the cross, signified the horrors He went through as the world’s sin-bearer but it also signified the delights He felt as heaven’s most faithful servant! 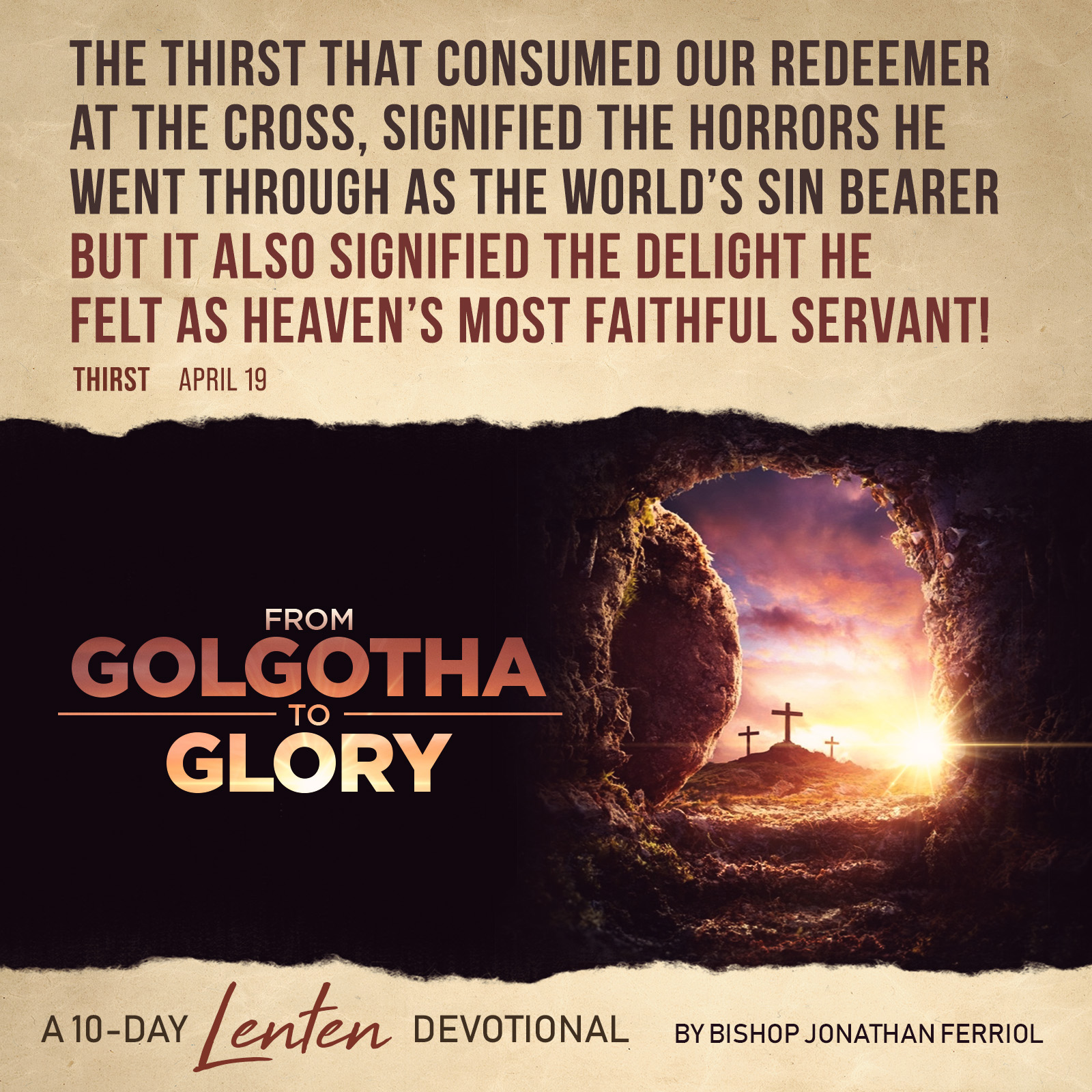